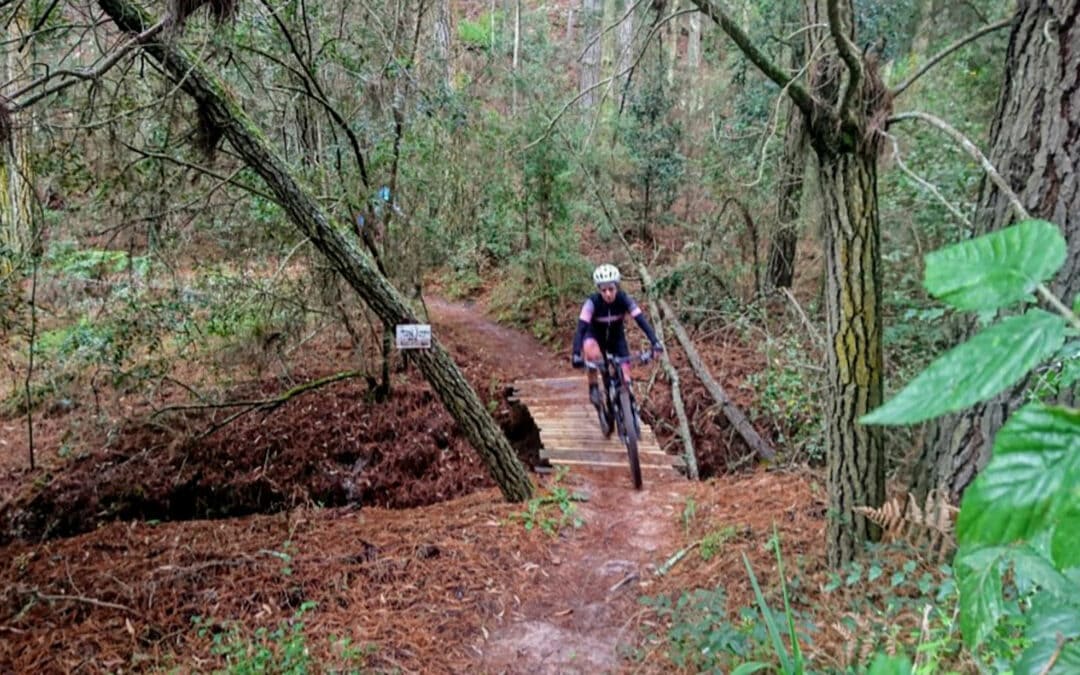 [vc_row][vc_column][vc_column_text]If you go ride in the Knysna woods today, you are in for a delightful surprise! The Concordia Contour Trails at the top of the Simola Hill in Knysna have slowly been transformed over the years in to a spectacular playground for outdoor enthusiasts. This has been largely due to the vision of Knysna local mountain biking enthusiast – Stuart Lightley. Stuart owned his first BMX at Primary School in 1980 and first MTB in 1991 and from there a love affair with cycling began that has flourished over the years. He has donated a large amount of his time to building and improving trails in Knysna for everyone to enjoy. Stuart was the Captain of the Kingswood College Cycling Team in High School and has also impressively ridden the Lions Karoo to Coast over ten times on a single speed bicycle! Stuart is one of my old friends and is a laid back local Knysna gentleman who is easy to chat to, but also has a mischievous twinkle in his eyes. 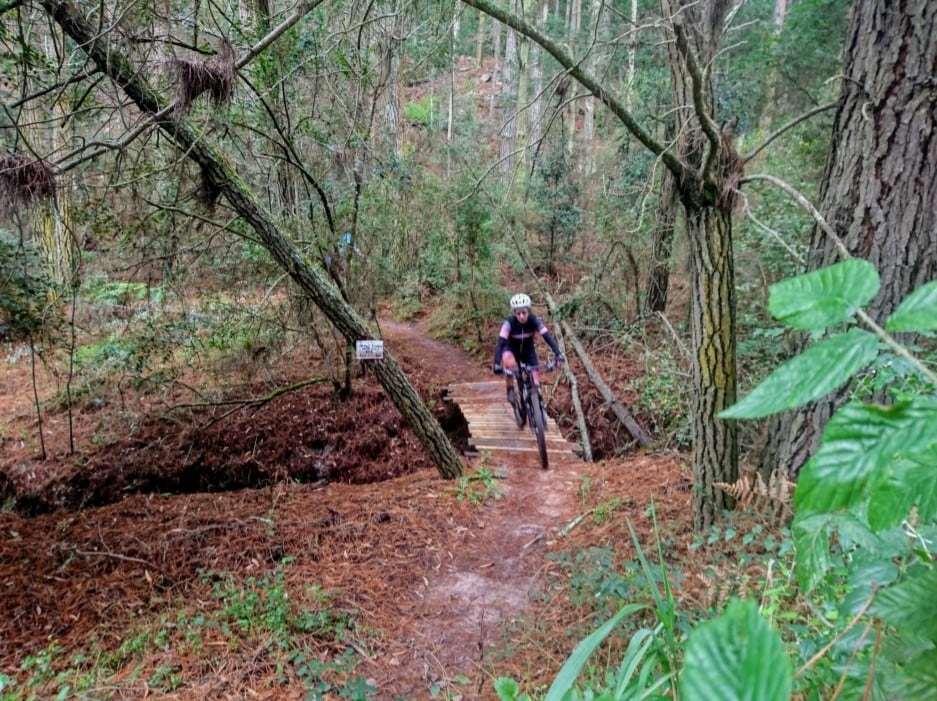 The addition of berms and bridges adds to the character of the Concordia Contour Trails.

How it all started…
Knysna had trails that were built for the Rotary Cycle Tour in the 1990s by Robbie Powell and “Dr Evil” Leon Evens, but when Robbie, who owned Knysna Cycle Works at the time, left to pursue his career, the trails disappeared due to forestry activities. The lack of technical single track had an effect on the local’s riding ability and Stuart felt
compelled to start building more challenging trails in order to remedy this. “Initially I built track in obscure places in the forest and they were hardly ever ridden. I then started
building closer to where people rode in the Concordia Contours.” The work is labour intensive and you need to understand mountain biking to create a good trail. Stuart uses a
Foresters Hoe which is a tool with a rake and a blade to clear a line of slashed branches and pine needles, and then to shape the trail. There are no mechanically built trails, only hand built trails in the Concordia riding area! From 2008 Stuart started committing more time to the trail building. “Sometimes we build three sections in a year and sometimes it takes a whole year to build one section of trail.” tuart said that David Correira, Nico Vreken, John Collins and Rolf Lampbrecht have also contributed to the trail builds over the years. “The beauty of this is that each has their own distinctive style and this lends itself to interesting riding.” 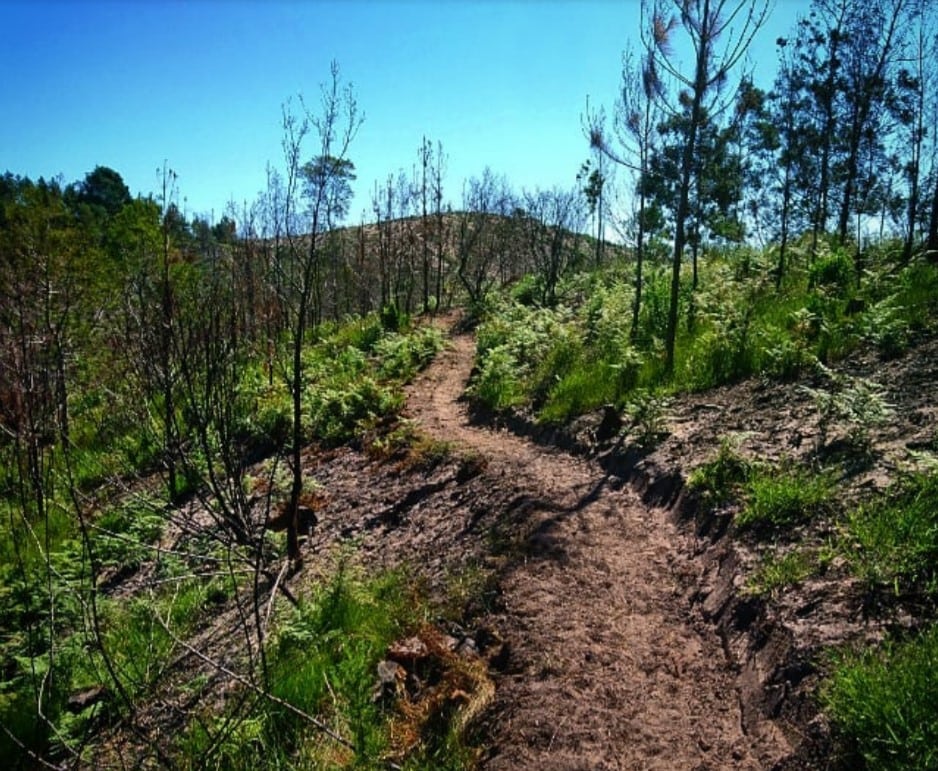 The top of the Blairwitch Singletrack

Quirks of the Contours
Stuart has named each of his section of trail after a piece of music close to his heart. David’s trails have a nautical theme. Children have now started to paint on the quaint wooden trail name boards. The “Heroes” board has hand painted images of Batman and Co. on it and “Tiny Dancer” is graced by a childlike drawing of a ballerina. The Forest Creepies is the sweetest initiative that was started in order to encourage children to get on their bicycles and get active. Children are encouraged to paint a “face rock” and hide it along the Contours. If they find a rock they can move it and hide it again. There is a dedicated Forest Creepies Facebook page where photos of the rocks are displayed and this
serves as motivation for children to explore the forest on their bicycles. Stuart loves to take his dogs along when he builds the trails and the late Iris (named after a
song by the Gugu Dolls) was his first building partner in the forest. Nowadays his Goldendoodle – Lucy’s face lights up when he gathers his equipment and heads for the hills
to build more single track for all of us to enjoy.

Nuts and Bolts of the Concordia Contours

You will find a total of around 25 kilometres of pristine trails in the Concordia Contours
plantations. The trails start at the top of the Simola Hill in Knysna, thus making the start point a mere five minute drive from the centre of town. There are as yet no marked routes
as such, to make up this distance but rather trails that are all signposted and discovering a new way to string them together is part of the charm. This is a great place to hone skills and fitness as the single track can be technically challenging as speed increases. There can also be quite a bit of climbing depending on which trails you ride. You can also ride many of the trails “both ways” to mix it up and link sections together to add mileage. In order to avoid getting lost – you can use the contours road and the sun in sections as your navigational tool – adding a sense of adventure to your outing. The Trailforks app and newly released MTO app also has all the trails mapped. The trails are suitable for mountain biking, hiking, trail running or simply walking your dogs. Beginners or advanced athletes are able to enjoy the trails. There is currently an understanding and a recently formalised agreement with land owners MTO Forestry. A permit system is being rolled out, via the MTO App, which will have maps, routes, emergency contacts etc. Route marking boards and trailhead maps and info should be going up soon! Anyone on the trails is asked not to damage trees, cause erosion and to be aware of the fire risk in the forest (and pick up their dog poop!). The trails are a definite asset to Environmental Tourism in the area.

The beautiful “Why Not” section.

Vision
The long term vision would be to link the MTO Trails in the Garden Route – between areas such as Concordia, Kurland, Cairnbrogie and as far as Storms River – creating a labyrinth of trail riding heaven in the area for all to enjoy. 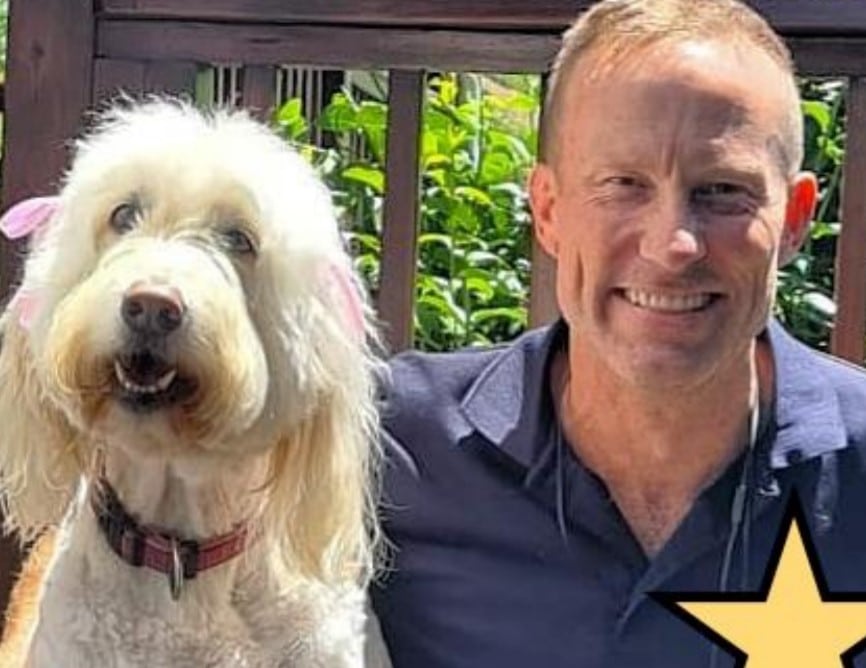 WHILE YOU ARE RACING

There will be sufficient water points on route with approximately one point every 30 kilometres. There will be snacks and drinks at each point. Riders are encouraged to carry their own drinks on their bikes and some food just in case. We aim to make our points as special as possible and will have First Aids Kits, communication systems should you require assistance and massage options as well as lubrication for bicycles.

WHEN YOU FINISH RACING FOR THE DAY

Squirt will provide a Bike Wash and Lubrication Bay after each day of racing FOR FREE FOR ALL competitors!

There will be registered, adequately trained massage staff available at the race village each day at the race finish. There will be a Bike Park sponsored by S&J Hiring with a dedicated security guard from Plett Security.

TECHNICAL ASSISTANCE: Tech Zone offer technical assistance for the three day stage race and you can contact JP van Zyl or Saretha directly for details at info@recycles.co.za to book services. A full race check for the 3 day event will cost R1095.00 and bookings in advance are recommended.

Tea and coffee will be served in the morning.

WEATHER ON THE ROUTE

Please be prepared for rain, cold or hot weather. The event takes place at a time of the year where weather can be unpredictable in the Southern Cape.

AT THE RACE VILLAGE

Dinner will be served at the Race Village for all competitors from the evening of Wednesday 21st September and LUNCHES will be provided to the riders on Thursday 22nd and Friday 23rd September as well as on Saturday 24th September at Cairnbrogie Dairy Farm. There will also be a vegetarian dish option available and all Meals will be prepared by a professional local catering company. There will be coffee / tea and snacks available at the venues before the start but riders are encouraged to eat breakfast at their accommodation before coming to the venue this year.

As the Dr Evil Classic and the Karoo to Coast are separate events, you will have to enter both events separately.

However all Dr Evil Riders will be automatically bumped up to the top 4 of 10 start groups for the 2022 Karoo to Coast.

Although you will still have to submit an entry for the Karoo to Coast event, all Dr Evil Riders will be automatically bumped up to the top 4 of 10 start groups for the 2022 Karoo to Coast.